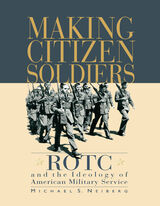 This book examines the Reserve Officers Training Corps program as a distinctively American expression of the social, cultural, and political meanings of military service. Since 1950, ROTC has produced nearly two out of three American active duty officers, yet there has been no comprehensive scholarly look at civilian officer education programs in nearly forty years.

While most modern military systems educate and train junior officers at insular academies like West Point, only the United States has relied heavily on the active cooperation of its civilian colleges. Michael Neiberg argues that the creation of officer education programs on civilian campuses emanates from a traditional American belief (which he traces to the colonial period) in the active participation of civilians in military affairs. Although this ideology changed shape through the twentieth century, it never disappeared. During the Cold War military buildup, ROTC came to fill two roles: it provided the military with large numbers of well-educated officers, and it provided the nation with a military comprised of citizen-soldiers. Even during the Vietnam era, officers, university administrators, and most students understood ROTC's dual role. The Vietnam War thus led to reform, not abandonment, of ROTC.