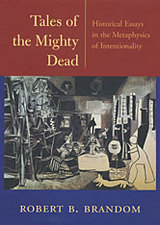 Tales of the Mighty Dead: Historical Essays in the Metaphysics of Intentionality
by Robert Brandom
Harvard University Press, 2002
Cloth: 978-0-674-00903-5
A work in the history of systematic philosophy that is itself animated by a systematic philosophic aspiration, this book by one of the most prominent American philosophers working today provides an entirely new way of looking at the development of Western philosophy from Descartes to the present.

Brandom begins by setting out a historical context and outlining a methodological rationale for his enterprise. Then, in chapters on Spinoza, Leibniz, Hegel, Frege, Heidegger, and Sellars, he pursues the most fundamental philosophical issues concerning intentionality, and therefore mindedness itself, revealing an otherwise invisible set of overlapping themes and explanatory strategies. Variously functionalist, inferentialist, holist, normative, and social pragmatist in character, the explanations of intentionality offered by these philosophers, taken together, form a distinctive tradition. The fresh perspective afforded by this tradition enriches our understanding of the philosophical topics being addressed, provides a new conceptual vantage point for viewing our philosophical ancestors, and highlights central features of the sort of rationality that consists in discerning a philosophical tradition--and it does so by elaborating a novel, concrete instance of just such an enterprise.

PART ONE. TALKING WITH A TRADITION

8. Frege's Technical Concepts
I. Bell on Sense and Reference
II. Sluga on the Development of Frege's Thought
III. Frege's Argument

11. Dasein, the Being That Thematizes
I. Background
II. Direct Arguments for Dasein's Having Sprache
III. No Dasein without Rede
IV. Rede and Gerede
V. Falling: Gerede, Neugier, Zweideutigkeit

Reviews of this book:
Just as Kant managed to recast a good bit of the history of philosophy as a struggle between rationalism and empiricism (thus leading to his synthesis of the two), Brandom has recast a substantial portion of modern philosophy as a struggle over the consequences of inferentialist approaches. The way he shows that there is a coherent line to he traced from Leibniz to Spinoza to Kant to Hegel to Frege to Heidegger to Wittgenstein to Sellars is brilliant; it will quite naturally also he controversial (in all the best senses). This is one of those books that will force even the people who disagree most with him to have to take his position all the more seriously. If nothing else, this shows that the usual ways of drawing the (by now tired) "continental/analytic" distinctions are in serious need of rethinking. Brandom's is an original voice. Brandom's work, obviously analytical in orientation, also claims to take its inspirations from figures normally shunned in analytic circles. This makes him a key figure in the effort to "overcome" the dichotomy.
--Terry Pinkard, Notheastern University