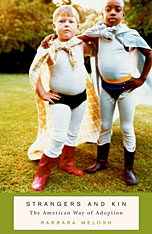 Strangers and Kin is the history of adoption. An adoptive mother herself, Barbara Melosh tells the story of how married couples without children sought to care for and nurture other people's children as their own. Taking this history into the early twenty-first century, Melosh offers unflinching insight to the contemporary debates that swirl around adoption: the challenges to adoption secrecy; the ethics and geopolitics of international adoption; and the conflicts over transracial adoption.
TABLE OF CONTENTS