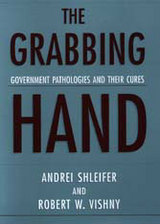 In many countries, public sector institutions impose heavy burdens on economic life: heavy and arbitrary taxes retard investment, regulations enrich corrupt bureaucrats, state firms consume national wealth, and the most talented people turn to rent-seeking rather than productive activities. As a consequence of such predatory policies--described in this book as the grabbing hand of the state--entrepreneurship lingers and economies stagnate.

The authors of this collection of essays describe many of these pathologies of a grabbing hand government, and examine their consequences for growth. The essays share a common viewpoint that political control of economic life is central to the many government failures that we observe. Fortunately, a correct diagnosis suggests the cures, including the best strategies of fighting corruption, privatization of state firms, and institutional building in the former socialist economies. Depoliticization of economic life emerges as the crucial theme of the appropriate reforms. The book describes the experiences with the grabbing hand government and its reform in medieval Europe, developing countries, transition economies, as well as today's United States.

Reviews of this book:
[The Grabbing Hand's] range of materials is impressive: the chapters deal with the growth of European cities before the industrial revolution, corruption in post-Soviet Russia, privatisation in Eastern Europe, local government in the United States, and more. The authors keep technical apparatus to a minimum. By any standard, let alone the debased standard of most modern economics, the essays are lucid and literate.
--The Economist