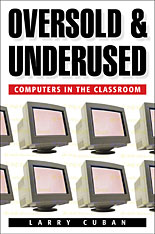 Impelled by a demand for increasing American strength in the new global economy, many educators, public officials, business leaders, and parents argue that school computers and Internet access will improve academic learning and prepare students for an information-based workplace.

But just how valid is this argument? In Oversold and Underused, one of the most respected voices in American education argues that when teachers are not given a say in how the technology might reshape schools, computers are merely souped-up typewriters and classrooms continue to run much as they did a generation ago. In his studies of early childhood, high school, and university classrooms in Silicon Valley, Larry Cuban found that students and teachers use the new technologies far less in the classroom than they do at home, and that teachers who use computers for instruction do so infrequently and unimaginatively.

Cuban points out that historical and organizational economic contexts influence how teachers use technical innovations. Computers can be useful when teachers sufficiently understand the technology themselves, believe it will enhance learning, and have the power to shape their own curricula. But these conditions can’t be met without a broader and deeper commitment to public education beyond preparing workers. More attention, Cuban says, needs to be paid to the civic and social goals of schooling, goals that make the question of how many computers are in classrooms trivial.
TABLE OF CONTENTS
Contents
Introduction: Reforming Schools through Technology
1. The Setting
2. Cyberteaching in Preschools and Kindergartens
3. High-Tech Schools, Low-Tech Learning
4. New Technologies in Old Universities
5. Making Sense of Unexpected Outcomes
6. Are Computers in Schools Worth the Investment?
Appendix: Rationale for Choices of School Levels
Notes
Acknowledgments
Index