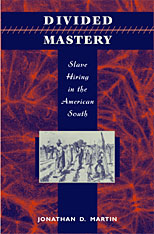 Divided Mastery explores a curiously neglected aspect of the history of American slavery: the rental of slaves. Though few slaves escaped being rented out at some point in their lives, this is the first book to describe the practice, and its effects on both slaves and the peculiar institution.

The practice bolstered the system of slavery by facilitating its spread into the western territories, by democratizing access to slave labor, and by promoting both production and speculation with slave capital. But at the same time, slaves used hiring to their advantage, finding in it crucial opportunities to shape their work and family lives, to bring owners and hirers into conflict with each other, and to destabilize the system of bondage. Martin illuminates the importance of the capitalist market as a tool for analyzing slavery and its extended relationships. Through its fresh and complex perspective, Divided Mastery demonstrates that slave hiring is critical to understanding the fundamental nature of American slavery, and its social, political, and economic place in the Old South.

Introduction: Slaves with Two Masters
1 Slave Hiring in the Evolution of Slavery
2 A Blessing and a Curse
3 Risks and Returns
4 Compromised Mastery
5 Resistance and Abuse
6 Working Alone
Epilogue

"This finely crafted, thought-provoking study of slave hiring in the antebellum South fills a major gap in the historical literature. Divided Mastery will be of great interest to students of American slavery."
--Peter Kolchin, author of American Slavery, 1619-1877

"Divided Mastery greatly extends and systematizes our knowledge of slave hiring as a practice making slavery a more economically flexible institution. Martin also writes insightfully about the emotional and psychological complexities attending the interaction of slaves, owners, and hirers. This will be the standard reference for historians interested in slave hiring, and Martin's vigorous prose style should attract a wider readership as well for this fine new book."
--T. Stephen Whitman, author of Challenging Slavery in the Chesapeake, 1775-1865

"Martin has done more than fill an important niche in understanding slavery in the American South; his work adds an appreciation of the complexity of slavery by unraveling--in fine detail--precisely how the system of slave hiring worked. It reveals how the rental of slaves at once expanded and constrained the latitude of both master and slave, at times allowing slaveholders to gain greater flexibility and profit in the employment of their human property and permitting slaves to secure greater independence and control over their own lives. Divided Mastery is a significant addition to the literature on slavery in the US."
--Ira Berlin, author of
TABLE OF CONTENTS
Contents
Introduction: Slaves with Two Masters
1. Slave Hiring in the Evolution of Slavery
2. A Blessing and a Curse
3. Risks and Returns
4. Compromised Mastery
5. Resistance and Abuse
6. Working Alone
Epilogue
Abbreviations
Notes
Acknowledgments
Index