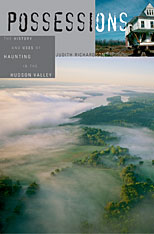 The cultural landscape of the Hudson River Valley is crowded with ghosts--the ghosts of Native Americans and Dutch colonists, of Revolutionary War soldiers and spies, of presidents, slaves, priests, and laborers. Possessions asks why this region just outside New York City became the locus for so many ghostly tales, and shows how these hauntings came to operate as a peculiar type of social memory whereby things lost, forgotten, or marginalized returned to claim possession of imaginations and territories. Reading Washington Irving's stories along with a diverse array of narratives from local folklore and regional writings, Judith Richardson explores the causes and consequences of Hudson Valley hauntings to reveal how ghosts both evolve from specific historical contexts and are conjured to serve the present needs of those they haunt. These tales of haunting, Richardson argues, are no mere echoes of the past but function in an ongoing, contentious politics of place. Through its tight geographical focus, Possessions illuminates problems of belonging and possessing that haunt the nation as a whole.

1. "How Comes theHudson to this Unique Heritage?"
2. Irving's Web
3. The Colorful Career of a Ghost from Leeds
4. Local Characters
5. Possessing High Tor Mountain

Reviews of this book:
The author traces changing versions of several ghostly tales that mutated over time to reflect local conditions and controversies as well as national political issues like abolitionism. Richardson shows that, thanks to the Hudson Valley's long history of settlement, the 'legendizing impetus' created by Washington Irving, and the area's established position as a tourist destination, it inspired at least three sometimes overlapping traditions of hauntings: the 'aboriginal' Dutch and Indian hauntings, the Revolutionary War hauntings, and industrial hauntings, which are traced in Maxwell Anderson's High Tor (1937) and T. Coraghessan Boyle's World's End (1987).
--J. J. Benardete, Choice

Possessions is a rare and brilliant book that seamlessly combines history and literature--revealing how richly they can support one another. It is a great pleasure to read: both fluent and profound.
--Alan Taylor, author of American Colonies and William Cooper's Town

This is a lively, well-written, and engaging interdisciplinary study. Richardson pursues two main goals: probing in considerable detail a body of early national folklore and its modern revivals and testing some more general notions about the uses to which such lore is put in the periods when it is recovered, reshaped, and reinvigorated. It is smart without being condescending, locally inflected without exhibiting the least bit of piety - and, I think, quite suggestive for scholars looking at other domains far beyond the Hudson Valley. She gives us a way of understanding how the "local" has figured in the cultural construction of Americanness.
--Wayne Franklin, author of Discoverers, Explorers, Settlers and The New World of James Fenimore Cooper
TABLE OF CONTENTS
Contents
Introduction
1. “How Comes the Hudson to this Unique Heritage?”
2. Irving’s Web
3. The Colorful Career of a Ghost from Leeds
4. Local Characters
5. Possessing High Tor Mountain
Epilogue: Hauntings without End
Notes
Index