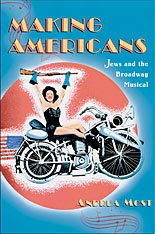 From 1925 to 1951--three chaotic decades of depression, war, and social upheaval--Jewish writers brought to the musical stage a powerfully appealing vision of America fashioned through song and dance. It was an optimistic, meritocratic, selectively inclusive America in which Jews could at once lose and find themselves--assimilation enacted onstage and off, as Andrea Most shows. This book examines two interwoven narratives crucial to an understanding of twentieth-century American culture: the stories of Jewish acculturation and of the development of the American musical.

Here we delve into the work of the most influential artists of the genre during the years surrounding World War II--Irving Berlin, Eddie Cantor, Dorothy and Herbert Fields, George and Ira Gershwin, Oscar Hammerstein, Lorenz Hart, and Richard Rodgers--and encounter new interpretations of classics such as The Jazz Singer, Whoopee, Girl Crazy, Babes in Arms, Oklahoma!, Annie Get Your Gun, South Pacific, and The King and I. Most's analysis reveals how these brilliant composers, librettists, and performers transformed the experience of New York Jews into the grand, even sacred acts of being American. Read in the context of memoirs, correspondence, production designs, photographs, and newspaper clippings, the Broadway musical clearly emerges as a form by which Jewish artists negotiated their entrance into secular American society. In this book we see how the communities these musicals invented and the anthems they popularized constructed a vision of America that fostered self-understanding as the nation became a global power.

1. Acting American: Jews, Theatricality, and Modernity
2. Cantors' Sons, Jazz Singers, and Indian Chiefs: The Invention of Ethnicity on the Musical Comedy Stage
3. Babes in Arms: The Politics of Theatricality during the Great Depression
4. "We Know We Belong to the Land": The Theatricality of Assimilation in Oklahoma!
5. The Apprenticeship of Annie Oakley: Or, "Doin' What Comes Natur'lly"
6. "You've Got to Be Carefully Taught": The Politics of Race in South Pacific

Coda: "I Whistle a Happy Tune"

Reviews of this book:
For lovers of musical comedy as well as those interested in Jewish contributions to the cultural life of America, this well-researched effort is an invaluable read.
--Publishers Weekly

Reviews of this book:
One of the major strengths of the book is that Most is an excellent social historian. Between her analyses of musicals, she deftly and economically chronicles an American living and changing from the Roaring Twenties to the Depression, World War II, and social upheavals of the post-war years.
--Tom Tugend, Jerusalem Post

Reviews of this book:
Andrea Most, in her perceptive new book Making Americans, answers the question of how Jewish immigrants and their sons created the iconic myths of an America they never intimately knew...Most examines the images and songs in such classics as Oklahoma!, Annie Get Your Gun, Babes in Arms and South Pacific to show how Jewish immigrants imagined America on the musical stage. Demonstrating how musicals shaped and were shaped by the shifting status of immigrants assimilating into a new culture, Most makes a case that the American musical was really a means by which the authors attempted to forge a new, accepting community...This book enlarges the perspective of anyone interested in the history of the American musical.
--Wendy Wasserstein, American Theatre

I think I argued with the author, Andrea Most, on just about every page of Making Americans and came away richer for the experience. What a stimulating book!
--Sheldon Harnick, author of the Broadway musical Fiddler on the Roof

Andrea Most's book makes the case for the core of the American musical. She outlines and illustrates how specific images of difference are translated, flattened, and transformed to create an America in which the ethnic becomes American. What 'becoming American' means--she shows with intelligence and panache--changes from the 1920s to the 1950s. And she illustrates this change with singular ability based on readings of the major musicals of the day.
--Sander Gilman, author of Jewish Frontiers and Jewish Self-Hatred

Making Americans is a groundbreaking work that will redefine the study of America's most popular and distinctive form of theatre, the Broadway musical. Andrea Most brilliantly analyzes the cultural struggles taking place in and around the musical during its golden age and demonstrates its indispensability for any analysis of American culture.
--David Savran, author of A Queer Sort of Materialism: Recontextualizing American Theatre

It has been long understood that the classic musical is virtually a Jewish-American art form, and Most lays the historical and theoretical foundations for this understanding with expert authority.
--Stephen Banfield, author of Sondheim's Broadway Musicals

Hands down, the most incisive and original analysis of American musical theater yet published. Who says brilliant writing can't be compulsively readable? Lovers of musicals won't want this book to end. Students will thank their teachers for assigning it. The entire landscape of American culture looks different through the lens of this book. No one who reads it will ever again dismiss the Broadway musical as trivial.
--Rose Rosengard Subotnik, Specialist in American Musical Theatre, Brown University