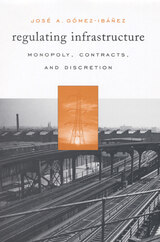 In the 1980s and '90s many countries turned to the private sector to provide infrastructure and utilities, such as gas, telephones, and highways--with the idea that market-based incentives would control costs and improve the quality of essential services. But subsequent debacles including the collapse of California's wholesale electricity market and the bankruptcy of Britain's largest railroad company have raised troubling questions about privatization. This book addresses one of the most vexing of these: how can government fairly and effectively regulate "natural monopolies"--those infrastructure and utility services whose technologies make competition impractical?

Rather than sticking to economics, JosÃƒÂ© GÃƒÂ³mez-IbÃƒÂ¡ÃƒÂ±ez draws on history, politics, and a wealth of examples to provide a road map for various approaches to regulation. He makes a strong case for favoring market-oriented and contractual approaches--including private contracts between infrastructure providers and customers as well as concession contracts with the government acting as an intermediary--over those that grant government regulators substantial discretion. Contracts can provide stronger protection for infrastructure customers and suppliers--and greater opportunities to tailor services to their mutual advantage. In some cases, however, the requirements of the firms and their customers are too unpredictable for contracts to work, and alternative schemes may be needed.

1. Monopoly as a Contracting Problem
2. The Choice of Regulatory Strategy

Part I. Regulatory Politics and Dynamics

3. The Behavior of Regulatory Agencies
4. Capture and Instability: Sri Lankas Buses and U.S. Telephones
5. Incompleteness and Its Consequences: Argentinas Railroads
6. Forestalling Expropriation: Electricity in the Americas

Regulating Infrastructure: Monopoly, Contracts and Discretion is a book that merges the modern economics of the firm with traditional regulatory concerns in an original and provocative way. It is a valuable contribution to the literature that should be read by anyone concerned with redefining regulation for the new Century.
--Michael E. Levine, Yale Law School
TABLE OF CONTENTS
Contents
Acknowledgments
1. Monopoly as a Contracting Problem
2. The Choice of Regulatory Strategy
I Regulatory Politics and Dynamics
3. The Behavior of Regulatory Agencies
4. Capture and Instability: Sri Lanka’s Buses and U.S. Telephones
5. Incompleteness and Its Consequences: Argentina’s Railroads
6. Forestalling Expropriation: Electricity in the Americas
II Contract versus Discretionary Regulation
7. The Evolution of Concession Contracts: Municipal Franchises in North America
8. The Rediscovery of Private Contracts: U.S. Railroad and Airline Deregulation
9. Price-Cap Regulation: The British Water Industry
III Vertical Unbundling and Regulation
10. The Trade-off in Unbundling: Competition versus Coordination
11. Regulating Coordination: British Railroads
12. Designing Capacity Markets: Electricity in Argentina
13. The Prospects for Unbundling
14. The Future of Regulation
Notes
Index