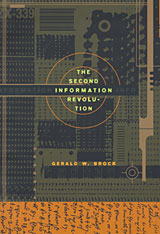 Thanks to inexpensive computers and data communications, the speed and volume of human communication are exponentially greater than they were even a quarter-century ago. Not since the advent of the telephone and telegraph in the nineteenth century has information technology changed daily life so radically. We are in the midst of what Gerald Brock calls a second information revolution.

Brock traces the complex history of this revolution, from its roots in World War II through the bursting bubble of the Internet economy. As he explains, the revolution sprang from an interdependent series of technological advances, entrepreneurial innovations, and changes to public policy. Innovations in radar, computers, and electronic components for defense projects translated into rapid expansion in the private sector, but some opportunities were blocked by regulatory policies. The contentious political effort to accommodate new technology while protecting beneficiaries of the earlier regulated monopoly eventually resulted in a regulatory structure that facilitated the explosive growth in data communications. Brock synthesizes these complex factors into a readable economic history of the wholesale transformation of the way we exchange and process information.

2. The First Information Revolution
The Development of Telegraph Services
The Telephone and State Regulation
Radio and Federal Regulation

I. THE SEPARATE WORLDS OF COMPUTERS AND COMMUNICATIONS, 1950-1968

5. The Early Semiconductor Industry
The Creation of a Competitive Market
Innovation and the Integrated Circuit
Falling Prices, Rising Output

15. The Internet and the World Wide Web
The Commercial Internet and Backbone Interconnection
The Development of the Web
The New Economy Financial Boom and Bust
Real Growth in Telecommunication and Price Benefits

Reviews of this book:
The Second Information Revolution is important reading for anyone who needs to understand the functioning of American telecommunications, either to be able to analyse today's financial markets or to understand or influence public policy in this area.
--Wendy M. Grossman, Times Higher Education Supplement [UK]

Reviews of this book:
Brock traces a phenomenon he refers to as the 'second information revolution.' According to Brock, there have been two times in history when information technology has dramatically changed daily life. The first 'information revolution' occurred with the advent of the telephone and telegraph, which made communication less expensive and more readily available. The second information revolution is currently in progress...A concise, thorough, and well-written history of the transformation in exchanging and processing of information.
--K. A. Coombs, Choice
TABLE OF CONTENTS
Contents
Acknowledgments
Abbreviations
1. Introduction
2. The First Information Revolution
3. Technological Origins of the Second Information Revolution, 1940–1950
4. The SAGE Project
I. The Separate Worlds of Computers and Communications
5. The Early Semiconductor Industry
6. The Early Commercial Computer Industry
7. The Regulated Monopoly Telephone Industry
II. Boundary Disputes and Limited Competition, 1969–1984
8. Data Communications
9. From Mainframes to Microprocessors
10. The Computer-Communications Boundary
11. Fringe Competition in Long Distance Telephone Service
12. Divestiture and Access Charges
III. Interconnected Competition and Integrated Services, 1985–2002
13. Mobile Telephones and Spectrum Reform
14. Local Competition and the Telecommunications Act of 1996
15. The Internet and the World Wide Web
16. Conclusion
References
Index