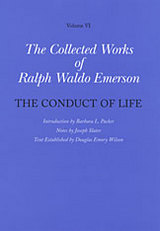 The essays in this book, first published in 1860, were developed from a series of lectures on "The Conduct of Life" delivered by Emerson during the early 1850s. Some of the original lectures were dropped and the rest were considerably revised, with new topics introduced. The published essays, on "Fate," "Power," "Wealth," "Culture," "Behavior," "Worship," "Considerations by the Way," "Beauty," and "Illusions," show Emerson's interest in many practical aspects of human life, and reflect his increasing involvement in politics--chiefly in the antislavery movement--during the decade before the Civil War.

This edition is based on Emerson's holograph manuscripts and published sources. The text incorporates Emerson's later corrections and revisions, and shows us what he actually wrote (or, perhaps in some cases, intended to write).

Barbara Packer's historical introduction traces the book's development and its relation to Emerson's own personal growth and political awareness. Joseph Slater's explanatory notes help the modern reader to understand many of Emerson's references and allusions that may not be readily apparent.

The Conduct of Life