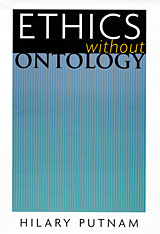 In this brief book one of the most distinguished living American philosophers takes up the question of whether ethical judgments can properly be considered objective--a question that has vexed philosophers over the past century. Looking at the efforts of philosophers from the Enlightenment through the twentieth century, Putnam traces the ways in which ethical problems arise in a historical context. Hilary Putnam's central concern is ontology--indeed, the very idea of ontology as the division of philosophy concerned with what (ultimately) exists. Reviewing what he deems the disastrous consequences of ontology's influence on analytic philosophy--in particular, the contortions it imposes upon debates about the objective of ethical judgments--Putnam proposes abandoning the very idea of ontology. He argues persuasively that the attempt to provide an ontological explanation of the objectivity of either mathematics or ethics is, in fact, an attempt to provide justifications that are extraneous to mathematics and ethics--and is thus deeply misguided.
REVIEWS
Hilary Putnam is one of the most distinguished living American philosophers, a philosopher whose writings have done much to shape the agenda of analytic philosophy over the last forty years. Much of the interest of this book lies in the way that it illustrates, with unmistakable clarity, how severe a critic of mainstream analytic philosophy Putnam has become.
-- Michael Williams, Professor of Philosophy, Johns Hopkins University


Hilary Putnam's book, Ethics without Ontology, is written with all his usual clarity and verve. It crystallises some familiar themes of his work in very readable form.
-- Christopher Cordner Philosophical Investigations


Putnam provokes us in just the way philosophy should...[He] does not offer a fine-tuning of a particular approach to specific theories. He provocatively heralds a new enlightenment in such a way that will doubtless spark criticisms from those who denounce any further enlightenment in favor of skeptical outlooks. Putnam has presented a viable alternative to the two dominant, though well-worn, philosophical movements of our day.
-- Eric Thomas Weber Journal of Value Inquiry