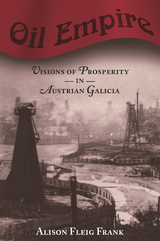 At the beginning of the twentieth century, the Austrian Empire ranked third among the world's oil-producing states (surpassed only by the United States and Russia), and accounted for five percent of global oil production. By 1918, the Central Powers did not have enough oil to maintain a modern military. How and why did the promise of oil fail Galicia (the province producing the oil) and the Empire?

In a brilliantly conceived work, Alison Frank traces the interaction of technology, nationalist rhetoric, social tensions, provincial politics, and entrepreneurial vision in shaping the Galician oil industry. She portrays this often overlooked oil boom's transformation of the environment, and its reorientation of religious and social divisions that had defined a previously agrarian population, as surprising alliances among traditional foes sprang up among workers and entrepreneurs, at the workplace, and in the pubs and brothels of new oiltowns.

Frank sets this complex story in a context of international finance, technological exchange, and Habsburg history as a sobering counterpoint to traditional modernization narratives. As the oil ran out, the economy, the population, and the environment returned largely to their former state, reminding us that there is nothing ineluctable about the consequences of industrial development.
TABLE OF CONTENTS
Contents
List of Illustrations
Acknowledgments
Note on Translation
Abbreviations
Map: The Austro-Hungarian Empire, 1867–1914
Introduction
1 The Land Where Salt and Oil Flowed: Austrian Galicia
2 Galician California: Battles for Land and Mineral Rights
3 Petroleum Fever: Foreign Entrepreneurs and a New National Industry
4 The Boys Don’t Sleep at Home: Workers’ Dreams of Wealth and Independence
5 Oil City: The Epidemic of Overproduction
6 Blood of the Earth: The Crisis of War
7 A Hotly Disputed Territory: The Struggle for Eastern Galicia
Conclusion
Appendix: Data on Oil Production
Notes
Archival and Primary Sources
Index