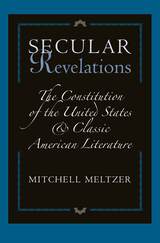 The United States Constitution is a quintessentially political document. Yet, until now, no one has seriously considered the formative influence of this document on American cultural life. In this ambitious book, Mitchell Meltzer demonstrates the extent to which the Constitution is both source and inspiration for America's greatest literary masterworks.
TABLE OF CONTENTS