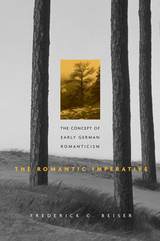 The Early Romantics met resistance from artists and academics alike in part because they defied the conventional wisdom that philosophy and the arts must be kept separate. Indeed, as the literary component of Romanticism has been studied and celebrated in recent years, its philosophical aspect has receded from view. This book, by one of the most respected scholars of the Romantic era, offers an explanation of Romanticism that not only restores but enhances understanding of the movement's origins, development, aims, and accomplishments--and of its continuing relevance.

Poetry is in fact the general ideal of the Romantics, Frederick Beiser tells us, but only if poetry is understood not just narrowly as poems but more broadly as things made by humans. Seen in this way, poetry becomes a revolutionary ideal that demanded--and still demands--that we transform not only literature and criticism but all the arts and sciences, that we break down the barriers between art and life, so that the world itself becomes "romanticized." Romanticism, in the view Beiser opens to us, does not conform to the contemporary division of labor in our universities and colleges; it requires a multifaceted approach of just the sort outlined in this book.

This is an excellent book. Its ten chapters are much more accessible and often clearer than the larger classic tomes on the subject. Each takes up a very significant topic and is sure to be read with profit by a wide range of readers - whether they are new to the field or already quite familiar with it. The book concerns an era, Early German Romanticism, that is properly becoming a major focus of new research. This volume could become one of the most helpful steps in making the area part of the canon for Anglophone scholars in all fields today. It is surely one of the best remedies for correcting out of date images of the work of the German romantics as regressive, obscurantist, or irrelevant. Early German Romanticism extends and modifies the project of the Enlightenment. The author shows that it deserves our attention not only because it is an era represented by some of the most interesting and creative personalities in our cultural history, but also because its main line of thought is responsible for a way of thinking central to our own time, namely a naturalism that might be expansive enough to do justice to traditional interests in the unique value of human freedom.
--Karl Ameriks, Professor of Philosophy, University of Notre Dame

This book is a very fine and erudite study. It is impressively wide-ranging: literature, metaphysics, political philosophy, science, ethics, and religion all come seriously into play. It almost functions as an introduction to Early German Romanticism at a very high though not forbidding level.
--Ian Balfour, Professor of English, York University
TABLE OF CONTENTS