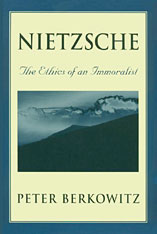 Once regarded as a conservative critic of culture, then enlisted by the court theoreticians of Nazism, Nietzsche has come to be revered by postmodern thinkers as one of their founding fathers, a prophet of human liberation who revealed the perspectival character of all knowledge and broke radically with traditional forms of morality and philosophy.

In Nietzsche: The Ethics of an Immoralist, Peter Berkowitz challenges this new orthodoxy, asserting that it produces a one-dimensional picture of Nietzsche’s philosophical explorations and passes by much of what is provocative and problematic in his thought. Berkowitz argues that Nietzsche’s thought is rooted in extreme and conflicting opinions about metaphysics and human nature. Discovering a deep unity in Nietzsche’s work by exploring the structure and argumentative movement of a wide range of his books, Berkowitz shows that Nietzsche is a moral and political philosopher in the Socratic sense whose governing question is, “What is the best life?”

Nietzsche, Berkowitz argues, puts forward a severe and aristocratic ethics, an ethics of creativity, that demands that the few human beings who are capable acquire a fundamental understanding of and attain total mastery over the world. Following the path of Nietzsche’s thought, Berkowitz shows that this mastery, which represents a suprapolitical form of rule and entails a radical denigration of political life, is, from Nietzsche’s own perspective, neither desirable nor attainable.

Out of the colorful and richly textured fabric of Nietzsche’s books, Peter Berkowitz weaves an interpretation of Nietzsche’s achievement that is at once respectful and skeptical, an interpretation that brings out the love of truth, the courage, and the yearning for the good that mark Nietzsche’s magisterial effort to live an examined life by giving an account of the best life.
TABLE OF CONTENTS