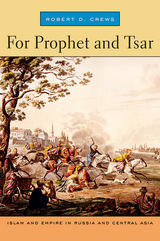 In stark contrast to the popular "clash of civilizations" theory that sees Islam inevitably in conflict with the West, Robert D. Crews reveals the remarkable ways in which Russia constructed an empire with broad Muslim support. For Prophet and Tsar unearths the fascinating relationship between an empire and its subjects. As America and Western Europe debate how best to secure the allegiances of their Muslim populations, Crews offers a unique and critical historical vantage point.
TABLE OF CONTENTS
CONTENTS
Note on Transliteration and Spelling
Introduction
1 A Church for Islam
2 The State in the Mosque
3 An Imperial Family
4 Nomads into Muslims
5 Civilizing Turkestan
6 Heretics, Citizens, and Revolutionaries
Epilogue
Abbreviations
Notes
Acknowledgments
Index