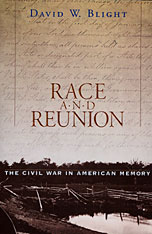 No historical event has left as deep an imprint on America's collective memory as the Civil War. In the war's aftermath, Americans had to embrace and cast off a traumatic past. David Blight explores the perilous path of remembering and forgetting, and reveals its tragic costs to race relations and America's national reunion.In 1865, confronted with a ravaged landscape and a torn America, the North and South began a slow and painful process of reconciliation. The ensuing decades witnessed the triumph of a culture of reunion, which downplayed sectional division and emphasized the heroics of a battle between noble men of the Blue and the Gray. Nearly lost in national culture were the moral crusades over slavery that ignited the war, the presence and participation of African Americans throughout the war, and the promise of emancipation that emerged from the war. Race and Reunion is a history of how the unity of white America was purchased through the increasing segregation of black and white memory of the Civil War. Blight delves deeply into the shifting meanings of death and sacrifice, Reconstruction, the romanticized South of literature, soldiers' reminiscences of battle, the idea of the Lost Cause, and the ritual of Memorial Day. He resurrects the variety of African-American voices and memories of the war and the efforts to preserve the emancipationist legacy in the midst of a culture built on its denial.

Blight's sweeping narrative of triumph and tragedy, romance and realism, is a compelling tale of the politics of memory, of how a nation healed from civil war without justice. By the early twentieth century, the problems of race and reunion were locked in mutual dependence, a painful legacy that continues to haunt us today.

REVIEWS
The most comprehensive and insightful study of the memory of the Civil War yet to appear…Blight tells this story in a lucid style and with an entirely appropriate measure of indignation…Race and Reunion demonstrates forcefully that…it still matters very much how we remember the Civil War.
-- Eric Foner New York Times Book Review


[This book] will strongly influence the writing of post–Civil War history for decades to come. Indeed, Race and Reunion is surely one of the four or five most important works in American history written in the past decade…Blight explains one of the most troubling questions for the understanding of American history: why it became accepted wisdom from the 1870s to the 1960s, among American historians as well as white students from grade school through college, that states’ rights, not slavery, was the cause of the Civil War or, as many Southerners have long insisted on our calling it, ‘the War Between the States.’
-- David Brion Davis New York Review of Books


As Blight conclusively demonstrates, the United States was caught up almost immediately in a ‘tormented relationship between healing and justice,’ and the abolitionist, emancipationist view of the war’s aims quickly receded into the background…African Americans kept alive their own memories of slavery, the war and Reconstruction…but not until long after World War I did they begin to find a hearing for their grievances and yearnings.
-- Jonathan Yardley Washington Post Book World


This is a story of mammoth and tragic sweep, with consequences that are very much alive in present-day America. David Blight tells it with a passionate, soulful voice, a voice of conviction based on an intimate knowledge of a sweeping array of sources. Race and Reunion is a brilliant book.
-- Providence Sunday Journal


Blight’s analysis is compelling. His writing has a lyrical quality that underscores the tragic story he has to tell. This is an important book that should command a wide readership among those interested in race relations in the US. It should be required reading in Mississippi.
-- Times Higher Education Supplement


[Blight’s] deeply researched and carefully crafted study argues that after the war white veterans, Union and Confederate, facilitated the reconciliation of the two sections by consciously avoiding the fact that slavery had brought on the sectional conflict, choosing instead to celebrate the courage that they and their comrades had brandished in battle. Less consciously, they and their fellow Americans found this new narrative—this rewriting of history based on a kind of historical amnesia—comforting and restorative. Reunification became a joyful event, but it came at a steep price. After Reconstruction, Northerners and Southerners alike took hold of a ‘Lost Cause’ ideology that showed pity toward the South in its defeat, accepted Jim Crow policies that deprived blacks of their civil rights, and pushed for policies and practices that would ensure white supremacy across the land. Blight carefully avoids grinding axes as he makes his argument, which taken as a whole helps to explain why America today continues to wrestle with the seemingly endless and divisive issue of race…Here is a powerful book, artfully written by a scholar of learned poise who believes that by knowing the past we might better know ourselves.
-- Glenn W. LaFantasie Salon


Denying that the South fought for slavery was a key element in a decades-long ideological battle eventually settled in a devil’s bargain: reconciliation between whites North and South, purchased at the price of racial segregation…Race and Reunion is a deeply unsettling, pioneering work that raises far more questions than it can possibly answer: questions that should continue to trouble us…The myths and lies forged over a century ago still have us locked in their chains.
-- Philadelphia City Paper


Blight’s eclecticism and erudition make this sweeping historical saga a pleasure to read…Race and Reunion challenges us to take seriously the clashes over the Civil War’s contested legacies and symbols, which Americans continue to debate.
-- Catherine Clinton American Prospect


Blight demonstrates how, in the aftermath of the war, the needs of memory and the excessive focus on battlefield experience all but obliterated the role played by African Americans, and the promises made them. All told, this thoughtful, timely study presents a somewhat pessimistic view of the role played by the memory of this key conflict in the making of American's self-image, which, in the turn to sentiment rather than fact, lost much of its ideological integrity.
-- Fionghuala Sweeney History


One of the most fascinating and rewarding scholarly books of the past few years for the general reader with an interest in American history…Blight is scrupulously fair in his judgments. He is equally alert to the Northern white self-congratulation that inflated the legend of the Underground Railroad and the racist pretension that shaped the version of history peddled by the United Daughters of the Confederacy. He is especially alert to the way that even-handedness has served as a tool for suppressing memory of the moral issues at the heart of the Civil War by turning attention to the spectacle of combat and the bravery of the soldiers on both sides…It is a contribution to contemporary politics and culture that deserves a wide audience.
-- Thomas J. Brown, author of Civil War Canon


This book effectively traces both the growth and development of what became, by the turn of the twentieth century and the debut of The Birth of a Nation, the dominant racist representation of the Civil War. A major work of American history, this volume’s documentation of the active and exceedingly articulate voices of protest against this inaccurate and unjust imagining of history is just one of its accomplishments.
-- Publishers Weekly


Blight traces America’s tragic pursuit of national reunification and reconciliation after the Civil War at the expense of the conflict’s emancipationist legacy. He ponders such threats to this legacy as Lost Cause myths, fading and sometimes revisionist veteran recollections, financial panics and commercial greed, political scandals, ‘loyal’ slave narratives, urbanization and industrialization, and the emotionally charged rituals of war-related celebration days among others. The author resurrects the voices and prose of African American activists who fought to preserve the emancipationist legacy in an indifferent, even hostile, milieu.
-- Library Journal


Blight recounts the strong tide in the post-war years for ‘reunion on Southern terms’…Freed blacks suffered the consequence of the ascendance of a sentimental view of the war and amnesia about its central issue.
-- Gilbert Taylor Booklist

TABLE OF CONTENTS
Contents
Prologue
1. The Dead and the Living
2. Regeneration and Reconstruction
3. Decoration Days
4. Reconstruction and Reconciliation
5. Soldiers' Memory
6. Soldiers' Faith
7. The Literature of Reunion and Its Discontents
8. The Lost Cause and Causes Not Lost
9. Black Memory and Progress of the Race
10. Fifty Years of Freedom and Reunion
Epilogue
Notes
Acknowledgments
Index