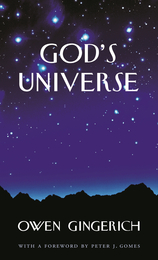 We live in a universe with a very long history, a vast cosmos where things are being worked out over unimaginably long ages. Stars and galaxies have formed, and elements come forth from great stellar cauldrons. The necessary elements are present, the environment is fit for life, and slowly life forms have populated the earth. Are the creative forces purposeful, and in fact divine?

Owen Gingerich believes in a universe of intention and purpose. We can at least conjecture that we are part of that purpose and have just enough freedom that conscience and responsibility may be part of the mix. They may even be the reason that pain and suffering are present in the world. The universe might actually be comprehensible.

Taking Johannes Kepler as his guide, Gingerich argues that an individual can be both a creative scientist and a believer in divine design--that indeed the very motivation for scientific research can derive from a desire to trace God's handiwork. The scientist with theistic metaphysics will approach laboratory problems much the same as does his atheistic colleague across the hall. Both are likely to view the astonishing adaptations in nature with a sense of surprise, wonder, and mystery.

In God's Universe Gingerich carves out "a theistic space" from which it is possible to contemplate a universe where God plays an interactive role, unnoticed yet not excluded by science.
TABLE OF CONTENTS
Cover
Title Page
Copyright
Contents
Foreword
Prologue and Pilgrimage
Chapter 1. Is Mediocrity a Good Idea?
Chapter 2. Dare a Scientist Believe in Design?
Chapter 3. Questions without Answers
Epilogue
Notes
Acknowledgments
Index