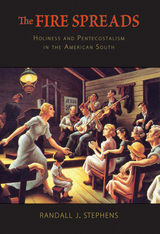 Today pentecostalism claims nearly 500 million followers worldwide. An early stronghold was the American South, where believers spoke in unknown tongues, worshipped in free-form churches, and broke down social barriers that had long divided traditional Protestants. Thriving denominations made their headquarters in the region and gathered white and black converts from the Texas plains to the Carolina low country.

Pentecostalism was, in fact, a religious import. It came to the South following the post-Civil War holiness revival, a northern-born crusade that emphasized sinlessness and religious empowerment. Adherents formed new churches in the Jim Crow South and held unconventional beliefs about authority, power, race, and gender. Such views set them at odds with other Christians in the region. By 1900 nearly all southern holiness folk abandoned mainline churches and adopted a pessimistic, apocalyptic theology. Signs of the last days, they thought, were all around them.

With the growth of southern pentecostal denominations and the rise of new, affluent congregants, the movement moved cautiously into the evangelical mainstream. By the 1980s the once-apolitical faith looked entirely different. Many still watched and waited for spectacular signs of the end. Yet a growing number did so as active political conservatives.
TABLE OF CONTENTS