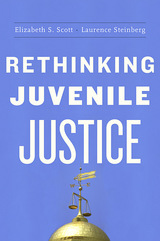 "
What should we do with teenagers who commit crimes? Are they children whose offenses are the result of immaturity and circumstances, or are they in fact criminals?

“Adult time for adult crime” has been the justice system’s mantra for the last twenty years. But locking up so many young people puts a strain on state budgets—and ironically, the evidence suggests it ultimately increases crime.

In this bold book, two leading scholars in law and adolescent development offer a comprehensive and pragmatic way forward. They argue that juvenile justice should be grounded in the best available psychological science, which shows that adolescence is a distinctive state of cognitive and emotional development. Although adolescents are not children, they are also not fully responsible adults.

Elizabeth Scott and Laurence Steinberg outline a new developmental model of juvenile justice that recognizes adolescents’ immaturity but also holds them accountable. Developmentally based laws and policies would make it possible for young people who have committed crimes to grow into responsible adults, rather than career criminals, and would lighten the present burden on the legal and prison systems. In the end, this model would better serve the interests of justice, and it would also be less wasteful of money and lives than the harsh and ineffective policies of the last generation.
"
TABLE OF CONTENTS