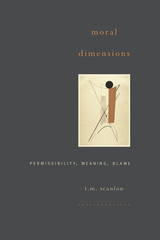 Scanlon reframes current philosophical debates as he explores the moral permissibility of an action. Blame, he argues, is a response to the meaning of an action rather than its permissibility. This analysis leads to a novel account of the conditions of moral responsibility and to important conclusions about the ethics of blame.
TABLE OF CONTENTS