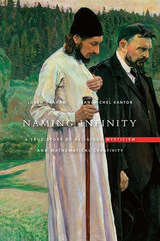 In 1913, Russian imperial marines stormed an Orthodox monastery at Mt. Athos, Greece to haul off monks engaged in a dangerously heretical practice known as Name Worshipping. Loren Graham and Jean-Michel Kantor take us on an exciting mathematical mystery tour as they unravel a bizarre tale of political struggles, psychological crises, sexual complexities, and ethical dilemmas. The men and women of the leading French and Russian mathematical schools are central characters in this absorbing tale that could not be told until now. Naming Infinity is a poignant human interest story that raises provocative questions about science and religion, intuition and creativity.
TABLE OF CONTENTS