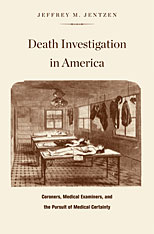 A death occurs at home, in a hospital, on a street: why? As Jeffrey Jentzen reveals, we often never know. Why is the American system of death investigation so inconsistent and inadequate? What can the events of the assassination of President Kennedy, killing of Bobby Kennedy, and Chappaquiddick reveal about the state of death investigation?

If communities in early America had a coroner at all, he was politically appointed and poorly trained. As medicine became more sophisticated and the medical profession more confident, physicians struggled to establish a professionalized, physician-led system of death investigation. The conflict between them and the coroners, as well as politicians and law enforcement agencies, led to the patchwork of local laws and practices that persist to this day.

In this unique political and cultural history, Jentzen draws on archives, interviews, and his own career as a medical examiner to look at the way that a long-standing professional and political rivalry controls public medical knowledge and public health.

REVIEWS
Jentzen's book stands alone and defines a field. It is full of ironic twists and the grim comedy of the often bizarre stories of famous death investigations in the past. Jentzen has an eye for the right anecdote to illustrate a large idea, and has found wonderful quotations to drive home his points. The United States deserves a better system of death investigation; Jentzen helps us understand why we never got one.
-- James Mohr, University of Oregon
TABLE OF CONTENTS
Contents
Introduction
1. Good and Lawful Men
2. Rockefeller Philanthropy and the Harvard Dream
3. A Model Law
4. Creating an Identity
5. In Search of Authority
6. Autonomy Challenged
7. Beyond Vital Statistics
8. The Road to Demedicalization
9. The Popularization of Forensic Pathology
10. In Search of Reasonable Medical Certainty
Epilogue
Notes
Select Bibliography
Acknowledgments
Index