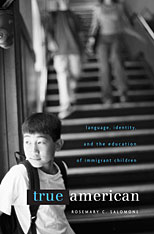 How can schools meet the needs of an increasingly diverse population of newcomers? Do bilingual programs help children transition into American life, or do they keep them in a linguistic ghetto? Are immigrants who maintain their native language uninterested in being American, or are they committed to changing what it means to be American?

In this ambitious book, Rosemary Salomone uses the heated debate over how best to educate immigrant children as a way to explore what national identity means in an age of globalization, transnationalism, and dual citizenship. She demolishes popular myths—that bilingualism impedes academic success, that English is under threat in contemporary America, that immigrants are reluctant to learn English, or that the ancestors of today’s assimilated Americans had all to gain and nothing to lose in abandoning their family language.

She lucidly reveals the little-known legislative history of bilingual education, its dizzying range of meanings in different schools, districts, and states, and the difficulty in proving or disproving whether it works—or defining it as a legal right.

In eye-opening comparisons, Salomone suggests that the simultaneous spread of English and the push toward multilingualism in western Europe offer economic and political advantages from which the U.S. could learn. She argues eloquently that multilingualism can and should be part of a meaningful education and responsible national citizenship in a globalized world.
TABLE OF CONTENTS
Contents
Preface
1. The Symbolic and the Salient
2. Americanization Past
3. The New Immigrants
4. Language, Identity, and Belonging
5. Rights, Ambivalence, and Ambiguities
6. Backlash
7. More Wrongs than Rights
8. Setting the Record Straight
9. Looking Both Ways
10. A Meaningful Education
Notes
Index