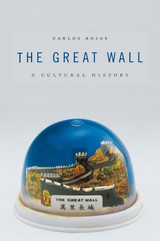 In this book, Carlos Rojas challenges two of the dominant contemporary visions of the Great Wall of China. In one view the Wall is popularly imagined as a two thousand year old national icon. However another recent theory posits that the Wall was not built until around the seventeenth century, and that the current fascination with the Wall is of even more recent provenance. Rojas rejects both of these theories as inaccurate. Instead, he argues that the Wall’s identity lies precisely in the productive tension between its underlying historical continuity and its continual process of transformation and reinvention. In addition, he posits that in order to appreciate the Wall’s historical significance it is necessary to move beyond a focus on the monument’s strictly material status and instead attend to the ways in which it has been discussed and represented, in other words, to see it as a cultural object.
TABLE OF CONTENTS
Contents
Illustrations
Selected Chronology
On Names
Prologue: On Origins
1. A Unity of Gaps
2. Aspirations of Immortality
3. Between History and Legend
4. A Garden of Forking Paths
5. Another Brick in the Wall
6. A Very Queer Thing
Epilogue: Return to Origins
Appendix: Getting There
Further Reading
Notes
Acknowledgments
Index