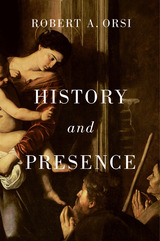 Honorable Mention, PROSE Award
A Choice Outstanding Academic Title of the Year
A Junto Favorite Book of the Year

Beginning with metaphysical debates in the sixteenth century over the nature of Christ’s presence in the host, the distinguished historian and scholar of religion Robert Orsi imagines an alternative to the future of religion that early moderns proclaimed was inevitable.

“This book is classic Orsi: careful, layered, humane, and subtle… If reformed theology has led to the gods’ ostensible absence in modern religion, History and Presence is a sort of counter-reformation literature that revels in the excesses of divine materiality: the contradictions, the redundancies, the scrambling of borders between the sacred and profane, the dead and the living, the past and the present, the original and the imitator…History and Presence is a thought-provoking, expertly arranged tour of precisely those abundant, excessive phenomena which scholars have historically found so difficult to think.”
—Sonja Anderson, Reading Religion

“With reference to Marian apparitions, the cult of the saints and other divine–human encounters, Orsi constructs a theory of presence for the study of contemporary religion and history. Many interviews with individuals devoted to particular saints and relics are included in this fascinating study of how people process what they believe.”
—Catholic Herald