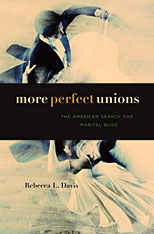 The American fixation with marriage, so prevalent in today's debates over marriage for same-sex couples, owes much of its intensity to a small group of reformers who introduced Americans to marriage counseling in the 1930s. Today, millions of couples seek help to save their marriages each year. Over the intervening decades, marriage counseling has powerfully promoted the idea that successful marriages are essential to both individuals' and the nation's well-being.

Rebecca Davis reveals how couples and counselors transformed the ideal of the perfect marriage as they debated sexuality, childcare, mobility, wage earning, and autonomy, exposing both the fissures and aspirations of American society. From the economic dislocations of the Great Depression, to more recent debates over government-funded "Healthy Marriage" programs, counselors have responded to the shifting needs and goals of American couples. Tensions among personal fulfillment, career aims, religious identity, and socioeconomic status have coursed through the history of marriage and explain why the stakes in the institution are so fraught for the couples involved and for the communities to which they belong.

Americans care deeply about marriages—their own and other people's—because they have made enormous investments of time, money, and emotion to improve their own relationships and because they believe that their personal decisions about whom to marry or whether to divorce extend far beyond themselves. This intriguing book tells the uniquely American story of a culture gripped with the hope that, with enough effort and the right guidance, more perfect marital unions are within our reach.

REVIEWS
In this original and beautifully- written history of marriage counseling, Rebecca Davis demonstrates that the American obsession with marriage says as much about the quest for the perfect nation as it does about the desire for marital bliss. More Perfect Unions is essential reading for anyone interested in changing ideas of marriage, intimacy, gender, race, sexuality, and American identity itself.
-- Elaine Tyler May, author of Homeward Bound: American Families in the Cold War Era


Marital conflict is centuries old, but as Davis shows in this eye-opening history, marriage counseling is a twentieth-century innovation. Her deft and lively analysis explains how an ideal of marital perfection has made Americans the most marrying kind in the Western world today.
-- Nancy F. Cott, Harvard University


Judicious, deeply researched, and rich with insight and fascinating detail, this book describes the debates surrounding marriage since the 1920s: the impact of divorce on children, the relationship between single parenthood and poverty, gender inequities in spousal roles, and the still unresolved tension between marriage and personal fulfillment.
-- Steven Mintz, author of Huck's Raft: A History of American Childhood


Davis details the convoluted origins, contradictory beliefs, and unanticipated consequences of America's marriage counseling and marriage promotion movements, both secular and religious, over the past 100 years. This excellent resource deals sensitively with the gender, racial, and sexual biases of its sources.
-- Stephanie Coontz, author, Marriage, a History: How Love Conquered Marriage


This fluent study traces Americans' changing attitudes towards marriage throughout the 20th century, with a particular emphasis on the period between the initial rise of marriage counseling in the 1930s and the emergence of the second wave of feminism in the 1960s and '70s. Davis considers myriad issues and influences, including shifting approaches to homosexuality, the role played by different religious institutions, and the impact of race on the public discourse on marriage. Davis illustrates her dense social history with illuminating case studies of such pivotal figures as the eugenicist Paul Popenoe, a pioneer in the field of marriage counseling, and Florence Hollis, a lesbian teacher and researcher who applied psychoanalytic theory to marriage counseling. These fascinating examples reveal the competing intellectual and social forces that had a stake in defining and influencing American marriage. The author balances this nuanced and admirably thorough history with unwavering emphasis on the impact of evolving gender roles on the institution.
-- Publishers Weekly


Davis presents marriage counseling as an institution with larger aims than connubial bliss, but also as a tool of the state, clergy and social scientists to help strengthen families, communities and economies.
-- Lisa Bonos Washington Post


How we acquired our exuberant faith in premarital counseling, as well as our conviction that marriage is an intrinsic part of American civic and religious life, is the story that is told in this fascinating book by cultural historian Rebecca Davis...As Davis shows, a movement that set out to repair marriage ended up transforming it.
-- William H. Willimon Christian Century


Sociologists can learn from this history. Marriage as an institution, including the sexism, heterosexism, and racism embedded in marital practices, is hard and slow to change. And much of what we consider to be new changes in marriage today, including government-backed marriage promotion and online matchmaking tests, actually have a long history in America. More Perfect Unions is a blissful read, of an at times frustrating but enlightening story.
-- Carrie Yodanis Contemporary Sociology


Compelling...Davis' attention to the marriage counseling work of American religious leaders is one of the most significant contributions of her work...More Perfect Unions clearly documents how the rise and development of marriage counseling decisively contributed to important changes in the American marital landscape. It offers the most comprehensive treatment of the profession to date and will serve as a necessary reference for all future considerations of the field and for larger discussions of therapeutic culture in the United States.
-- Kristin Celello Reviews in American History


What can we learn from a narrowly focused account of the history of marriage counseling? In the hands of a perceptive scholar such as Rebecca L. Davis, a great deal. More Perfect Unions traces the twisting contours of the American quest for marital perfection through the theories and practices of marriage counselors, clergy, social scientists, and psychotherapists--all of whom were devoted to a marriage-saving ethos...The most significant contribution Davis makes in this meticulously researched study, however, is the nuanced picture she gives us of ever-shifting gender roles. Marriage saving, after all, involved determining what one should be as a wife and what one should be as a husband, and those roles in turn defined what one should be as a woman and what one should be as man. For this reason, among others, this book is a must-read for scholars in women's history and gender studies.
-- Norma Basch Journal of American History


[Davis] sheds considerable light on the evolution of marriage counseling from an unregulated enterprise to a bonafide profession which at the turn of the present century possessed its own clinics, training programs, licensing standards, and bodies of expert knowledge...Among the many strengths of Davis's book is her coverage of the churches' involvement in marriage counseling...[A] ground-breaking book.
-- Ian Dowbiggin Journal of the History of Medicine and Allied Sciences