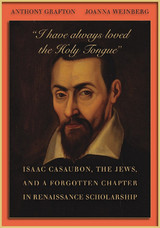 Isaac Casaubon (1559-1614) was one of Europe’s greatest Protestant scholars during the late Renaissance and was renowned for his expert knowledge of the early history of the church. Today, however, most of Casaubon’s books remain unread, and much of his vast archive remains unexplored. Grafton and Weinberg’s close examination of his papers reveal for the first time that Casaubon’s scholarship was broader and richer than anyone has previously suspected, and they present a Casaubon not found in earlier literature: one who used Jewish materials to illuminate, and at times to transform, scholars’ understanding of of early Christianity; and one who, at the end of his life, worked with a little-known Jewish scholar in order to master parts of the Talmud, which few Christians could study on their own. Most importantly , this book shows that a Christian scholar of the European Renaissance could explore—and develop striking sympathy and affection for—the alien world and worship of the Jews.
TABLE OF CONTENTS
Contents
List of Illustrations
A Note to Readers
1. Rabbi Isaac Casaubon
2. How CasaubonRead Hebrew Texts
3. Wider Horizons in Hebraic Studies
4. Casaubonand Baronio
5. The Teller and the Tale
Appendix 1
Appendix 2
Appendix 3
Glossary
Bibliography
Acknowledgments
Index