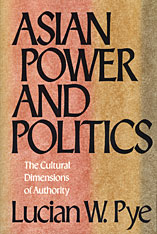 In a major new book, Lucian W. Pye reconceptualizes Asian political development as a product of cultural attitudes about power and authority. He contrasts the great traditions of Confucian East Asia with the Southeast Asian cultures and the South Asian traditions of Hinduism and Islam, and explores the national differences within these larger civilizations.

Breaking with modern political theory, Pye believes that power differs profoundly from one culture to another. In Asia the masses of the people are group-oriented and respectful of authority, while their leaders are more concerned with dignity and upholding collective pride than with problem-solving. As culture decides the course of political development, Pye shows how Asian societies, confronted with the task of setting up modern nation-states, respond by fashioning paternalistic forms of power that satisfy their deep psychological craving for security. This new paternalism may appear essentially authoritarian to Western eyes, but Pye maintains that it is a valid response to the people’s needs and will ensure community solidarity and strong group loyalties. He predicts that we are certain to see emerging from Asia’s accelerating transformation some new version of modern society that may avoid many of the forms of tension common to Western civilization but may also produce a whole new set of problems.

This book revitalizes Asian political studies on a plane that comprehends the large differences between Asia and the West and at the same time is sensitive to the subtle variations among the many Asian cultures. Its comparative perspective will provide indispensable insights to anyone who wishes to think more deeply about the modern Asian states.

REVIEWS
[A] rich and stimulating analysis which will be the subject of much scholarly debate.
-- Foreign Affairs


An extremely lucid, informative, and valuable work that meets a long-standing need for a readable and comprehensive view of the methods and cultural foundations of exercising power and authority in Asia.
-- Choice


Pye’s thesis is that as social psychology cannot be properly understood unless it is embodied in a context of individual psychology, so the phenomenon of power cannot be understood without reference to the cultural context within which it exists. Pye contends that those political scientists who study the nature of power have erred in treating it as a universal concept… Central to Pye’s thesis is his contrasting of the Western concept of individual autonomy with the Eastern concept of dependency on an idealized, benevolent, authoritarian leadership. Closely reasoned and brilliantly argued, this is a superb contribution to the international political debate.
-- Kirkus Reviews


Absorbing reading. It is written with a flair and dash that carries one along. Reading it is like following the figures in a richly textured tapestry. Pye’s mastery of this variety of complex cultures is impressive. It rings with authenticity.
-- Gabriel A. Almond, Stanford University


A broadly gauged analysis of contemporary Asian politics. This study is a fascinating mix of in-depth data and basic theses, both intra-culture and cross-cultural in nature. It will provide the basis for stimulating discussion and further research.
-- Robert A. Scalapino, Robson Research Professor of Government, University of California, Berkeley