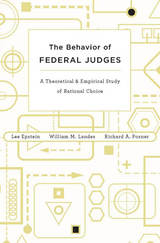 Federal judges are not just robots or politicians in robes, yet their behavior is not well understood, even among themselves. Using statistical methods, a political scientist, an economist, and a judge construct a unified theory of judicial decision-making to dispel the mystery of how decisions from district courts to the Supreme Court are made.
TABLE OF CONTENTS
Contents
List of Figures
List of Tables
General Introduction
Technical Introduction
1. A Realistic Theory of Judicial Behavior
2. The Previous Empirical Literature
3. The Supreme Court
4. The Courts of Appeals
5. The District Courts and the Selection Effect
6. Dissents and Dissent Aversion
7. The Questioning of Lawyers at Oral Argument
8. The Auditioners
Conclusion: The Way Forward
Acknowledgments
Index