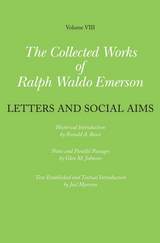 Letters and Social Aims, published in 1875, contains essays originally published early in the 1840s as well as those that were the product of a collaborative effort among Ralph Waldo Emerson, his daughter Ellen Tucker Emerson, his son Edward Waldo Emerson, and his literary executor James Eliot Cabot. The volume takes up the topics of “Poetry and Imagination,” “Social Aims,” “Eloquence,” “Resources,” “The Comic,” “Quotation and Originality,” “Progress of Culture,” “Persian Poetry,” “Inspiration,” “Greatness,” and, appropriately for Emerson’s last published book, “Immortality.”
The historical introduction demonstrates for the first time the decline in Emerson’s creative powers after 1865; the strain caused by the preparation of a poetry anthology and delivery of lectures at Harvard during this time; the devastating effect of a house fire in 1872; and how the Emerson children and Cabot worked together to enable Emerson to complete the book. The textual introduction traces this collaborative process in detail and also provides new information about the genesis of the volume as a response to a proposed unauthorized British edition of Emerson’s works.
Historical Introduction by Ronald A. Bosco