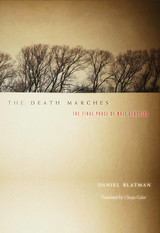 Blatman writes about the end phase of the German concentration camp system when the Nazis, realizing that they were losing the war, were faced with the enormous problem of what to do with the people being held captive. As these camps were being evacuated, the collapse of the front in Poland and the advance of the Red Army generated frantic waves of flight and the evacuation of millions of civilians and soldiers. The panicky retreat created conditions under which prisoners were murdered in horrific death marches. Gas chambers in faraway camps were no longer in use, and now the slaughters took place on the very doorsteps of ordinary German civilians' homes and in the streets German and Austrian towns. Unknown numbers of ordinary civilians across the dissolving Reich, fearing for the fate of their families and property, participated in the lethal eruption of violence. The book is divided into two sections. The first part provides an detailed overview of the camp system and a thorough chronological treatment of the camp evacuations during the winter of 1944-45 and the spring of 1945. The second part is a case study of the atrocity in the German town of Gardelegen where over 1000 prisoners were murdered, along with about 400 in the surrounding villages. This event serves as a focused example of the breakdown of the evacuation plans at the end of the war.
TABLE OF CONTENTS
Contents
Abbreviations
Introduction
I. The System Disintegrates
1. The Concentration Camps, 1933–1944
2. The Circumstances of Evacuation
3. Waves of Violence and Acts of Annihilation
4. Administrative Chaos and the Last Order
5. Murder Is Rampant
6. Dead Men Marching
II. Criminal Communities
7. A Society in Collapse
8. Marched toward Gardelegen
9. The Burning Barn
10. After the Flames
11. The Murderers
Conclusion
Notes
Bibliography
Acknowledgments
Index