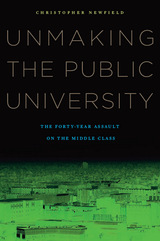 An essential American dream—equal access to higher education—was becoming a reality with the GI Bill and civil rights movements after World War II. But this vital American promise has been broken. Christopher Newfield argues that the financial and political crises of public universities are not the result of economic downturns or of ultimately valuable restructuring, but of a conservative campaign to end public education’s democratizing influence on American society. Unmaking the Public University is the story of how conservatives have maligned and restructured public universities, deceiving the public to serve their own ends. It is a deep and revealing analysis that is long overdue.

Newfield carefully describes how this campaign operated, using extensive research into public university archives. He launches the story with the expansive vision of an equitable and creative America that emerged from the post-war boom in college access, and traces the gradual emergence of the anti-egalitarian “corporate university,” practices that ranged from racial policies to research budgeting. Newfield shows that the culture wars have actually been an economic war that a conservative coalition in business, government, and academia have waged on that economically necessary but often independent group, the college-educated middle class. Newfield’s research exposes the crucial fact that the culture wars have functioned as a kind of neutron bomb, one that pulverizes the social and culture claims of college grads while leaving their technical expertise untouched. Unmaking the Public University incisively sets the record straight, describing a forty-year economic war waged on the college-educated public, and awakening us to a vision of social development shared by scientists and humanists alike.
TABLE OF CONTENTS