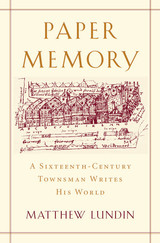 Paper Memory tells of one man’s mission to preserve for posterity the memory of everyday life in sixteenth-century Germany. Lundin takes us inside the mind of an undistinguished German burgher, Hermann Weinsberg, whose early-modern writings sought to make sense of changes that were unsettling the foundations of his world.
TABLE OF CONTENTS
Contents
Introduction
1. A Secret Legacy
2. My Father’s House
3. The Patriarch
4. The Middle Is Best
5. A Holy Household
6. As If We Had Never Been
7. Spare No Quill, Ink, or Paper
8. A New World
Conclusion
Notes
Bibliography
Acknowledgments
Index