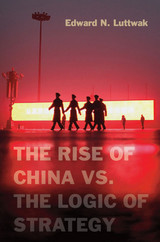 As the rest of the world worries about what a future might look like under Chinese supremacy, Edward Luttwak worries about China’s own future prospects. Applying the logic of strategy for which he is well known, Luttwak argues that the most populous nation on Earth—and its second largest economy—may be headed for a fall.

For any country whose rising strength cannot go unnoticed, the universal logic of strategy allows only military or economic growth. But China is pursuing both goals simultaneously. Its military buildup and assertive foreign policy have already stirred up resistance among its neighbors, just three of whom—India, Japan, and Vietnam—together exceed China in population and wealth. Unless China’s leaders check their own ambitions, a host of countries, which are already forming tacit military coalitions, will start to impose economic restrictions as well.

Chinese leaders will find it difficult to choose between pursuing economic prosperity and increasing China’s military strength. Such a change would be hard to explain to public opinion. Moreover, Chinese leaders would have to end their reliance on ancient strategic texts such as Sun Tzu’s Art of War. While these guides might have helped in diplomatic and military conflicts within China itself, their tactics—such as deliberately provoking crises to force negotiations—turned China’s neighbors into foes. To avoid arousing the world’s enmity further, Luttwak advises, Chinese leaders would be wise to pursue a more sustainable course of economic growth combined with increasing military and diplomatic restraint.

REVIEWS
National security strategist Edward Luttwak's provocative and insightful analysis of the 'logic of strategy' provides a well-documented, contrarian assessment of whether China's 'rise' will be peaceful or polarizing. He stresses the paradox that China's economic strength and territorial aggrandizement are inciting opposition by a growing coalition of states determined to weaken Beijing's power and influence. Luttwak asserts that only by maintaining Deng Xiaoping's policy of 'low posture' development, and downplaying military modernization, can China avoid international 'geo-economic resistance' and attain the domestic growth and global stature it seeks.
-- Richard H. Solomon, former President of the U.S. Institute of Peace, Senior Fellow at the RAND Corporation


Luttwak presents a rich, persuasive, and lucid analysis of the strategic implications of China's rise and of the anxieties it generates. China's foreign policy and military investments are raising concerns that require the sort of well-informed, precise argumentation that Luttwak delivers. Based on a long-term view of China's strategic inclinations and extensive research on current developments, this book offers medium-term predictions of the likely outcomes that the 'logic of strategy' may dictate, and thus explains with great clarity the issues at stake. Luttwak's work is a must-read for laymen and specialists alike, and an essential contribution to the political debate.
-- Nicola Di Cosmo, Institute for Advanced Study, Princeton


With muscular behavior and rhetoric on the uptick and China pouring money into its military, political strategists have begun to consider Chinese military dominance of the Pacific and a concurrent American decline as foregone conclusions. So it is refreshing to see Edward Luttwak take a different tack in The Rise of China vs. the Logic of Strategy and argue that Chinese military dominance in the Pacific is 'the least likely of outcomes.' China can't simultaneously enjoy a burgeoning economy and a rapidly growing military, he contends, because countries will band together to protect themselves, using military coalitions and trade protectionism to counter China's rise.
-- Mary Kissel Wall Street Journal


Most commentators on China focus on its seemingly inexorable rise and the threat that this poses to other world powers. In this well-argued book, Luttwak takes a different view. He questions whether China's rising power is sustainable. China's continued and rapid growth in economic capacity and military strength and regional and global influence cannot persist, he argues, because of the mounting opposition it is evoking.
-- Frank Dillon Irish Times


Luttwak detects a fundamental conflict between China's search for continuing economic growth, which the Communist Party has made its prime claim to rule, and its quest for military expansion combined with increased foreign policy assertiveness...Luttwak's book, which includes a refreshing put-down of the supposed superiority of traditional Chinese statecraft so admired by Henry Kissinger among others, is timely, coming as it does amid the current maritime confrontations in East Asia.
-- Jonathan Fenby Times Higher Education


The Rise of China vs. The Logic of Strategy is a sober book. Staying with the evidence, it avoids flights of fancy but grips readers' attention all the way through. Here, finally, is an expert on China who knows what he's talking about.
-- Caleb Nelson World


Luttwak's contribution to the China debate is to be welcomed. We need informed outsiders to weigh in with their views, and he has spent years visiting the country and talking to the Chinese, including the People's Liberation Army. Written with his customary panache, his vigorous and highly readable contribution will challenge congealed thinking.
-- George Walden Bloomberg.com


Over the past few decades, Edward Luttwak has gained a reputation as the bad boy of strategic theory and historical scholarship. This time, he has outdone himself. He has debunked Sun Tsu, the Clausewitz of the East and much beloved by teachers of military theory for decades...In The Rise of China vs. the Logic of Strategy, Luttwak goes beyond an attack on Sun Tsu. He argues that the dominant strategic and cultural arrogance of the Han people--the largest ethnic group in China--could undermine efforts to lift the Middle Kingdom to the ranks of true superpower status. Luttwak further argues that this assumption of cultural and intellectual superiority is driving China's neighbors into a camp of strategic containment similar to what Germany created for itself in the years leading up to World War I...It will be interesting to see whether the book is read with interest or banned once it is translated and made available on the Chinese mainland. It is a cautionary tale that deserves Chinese attention.
-- Gary Anderson Washington Times


[Luttwak's] thesis is sensible and not to be discounted lightly.
-- The Economist blog


Edward Luttwak's book on the limitations of China's ascent to power blends careful observation of recent events with an understanding of its past...The explanatory innovation that lifts Luttwak's book above the ruck of recent books on China's rise is his use of geo-economics--an expression he coined in 1980--to explain global resistance to Beijing's march. He argues that countries across the world, without explicit coordination, will resist China's export-oriented strategy to generate wealth and military power. This "invisible hand" explanation is in refreshing contrast to the usual containment and other political explanations about what may happen in East China in the coming years.
-- Siddharth Singh Mint


Entertaining and provocative...A bold book that flatly predicts that China won't successfully rise as a superpower, indeed that it cannot in its current incarnation...If accurate, Luttwak's theory means Americans don't have to worry too much. China will essentially self-destruct, at least diplomatically. And the list of problems facing China make it seem that this could well be happening right now.
-- Ian Johnson New York Review of Books