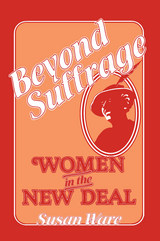 The New Deal administration of Franklin Roosevelt brought an unprecedented number of women to Washington to serve in positions of power and influence. Beyond Suffrage is a study of women who achieved positions of national leadership in the 1930s. Susan Ware discusses the network they established, their attitudes toward feminism and social reform, and the impact they had upon the New Deal's social welfare policies and on Democratic party politics.
REVIEWS
A sensitive collective biography of twenty-eight women New Dealers and…a description of their tactical means of operation… All can unite in thanking Ware for opening a uniquely political chapter in women’s history and for revitalizing the historiography of the New Deal.
-- Journal of American History


Beyond Suffrage is a welcome addition to the literature of the New Deal. Until now, there has been no adequate treatment of the role of women during this important period. Susan Ware…has based her book on an extensive and careful use of original sources. It is clearly written and analyzed with skill.
-- History


This is an excellent book. The story it has to tell is a new and compelling one.
-- Kathryn Kish Sklar, University of California, Los Angeles