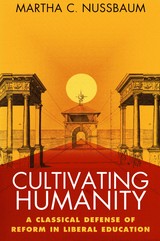 Cultivating Humanity: A Classical Defense of Reform in Liberal Education
by Martha C. Nussbaum
Harvard University Press, 1997
Paper: 978-0-674-17949-3
eISBN: 978-0-674-73546-0
How can higher education today create a community of critical thinkers and searchers for truth that transcends the boundaries of class, gender, and nation? Martha C. Nussbaum, philosopher and classicist, argues that contemporary curricular reform is already producing such “citizens of the world” in its advocacy of diverse forms of cross-cultural studies. Her vigorous defense of “the new education” is rooted in Seneca’s ideal of the citizen who scrutinizes tradition critically and who respects the ability to reason wherever it is found—in rich or poor, native or foreigner, female or male.

Drawing on Socrates and the Stoics, Nussbaum establishes three core values of liberal education: critical self-examination, the ideal of the world citizen, and the development of the narrative imagination. Then, taking us into classrooms and campuses across the nation, including prominent research universities, small independent colleges, and religious institutions, she shows how these values are (and in some instances are not) being embodied in particular courses. She defends such burgeoning subject areas as gender, minority, and gay studies against charges of moral relativism and low standards, and underscores their dynamic and fundamental contribution to critical reasoning and world citizenship.

For Nussbaum, liberal education is alive and well on American campuses in the late twentieth century. It is not only viable, promising, and constructive, but it is essential to a democratic society. Taking up the challenge of conservative critics of academe, she argues persuasively that sustained reform in the aim and content of liberal education is the most vital and invigorating force in higher education today.
TABLE OF CONTENTS
Contents
Preface
Introduction: The Old Education and the Think-Academy
Chapter 1: Socratic Self-Examination
Chapter 2: Citizens of the World
Chapter 3: The Narrative Imagination
Chapter 4: The Study of Non-Western Cultures
Chapter 5: African-American Studies
Chapter 6: Women's Studies
Chapter 7: The Study of Human Sexuality
Chapter 8: Socrates in the Religious University
Chapter 9: The "New" Liberal Education
Notes
Index