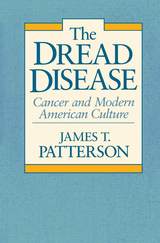 Cancer is that “loathsome beast, which seized upon the breast, drove its long claws into the surrounding tissues, derived its sustenance by sucking out the juices of its victims, and never even relaxed its hold in death,” a turn-of-the-century physician recorded. Even today cancer affects the popular imagination with dread. In a subtle and penetrating cultural history, James Patterson examines reactions to the disease through a century of American life.

The modern American preoccupation with cancer was apparent during the widely publicized illness and death from that ailment of Ulysses S. Grant in 1885. Awareness of the disease soon figured heavily in the public consciousness, and individual reactions to it continue to reveal broader tensions within American society. Patterson examines responses to cancer by researchers and physicians, quacks and faith healers, by the multitude who have heard sensational media reports of “cures,” as well as by many who have had firsthand experiences with the disease.

Optimistic attitudes of many experts contrast sharply with the skepticism of large segments of the population—often the less wealthy and the less educated—that reject the claims of medical science and resist the advice or, some argue, the paternalistic dictates of the government-supported cancer research establishment.

Expanding expectations of a cure from a confident medical profession; the rise of a government-supported Cancer Establishment managing a large research empire; the emergence of a “cancer counterculture”; a new emphasis on prevention through control of the environment and the self; and the private fears and pessimism of millions of Americans form a telling history of American social patterns. Whether the issue is smoking, pollution, or regular checkups, attitudes toward cancer reflect more general views on medicine, public policy, and illness, as well as on death and dying. This century has witnessed both a biomedical revolution and a vastly increased role of the state in the private lives of citizens; but not everyone has bought the medical package, and many have little faith in government intervention.

Readers interested in the cultural dimensions of science and medicine as well as historians, sociologists, and political scientists will be enlightened and challenged by The Dread Disease.
TABLE OF CONTENTS