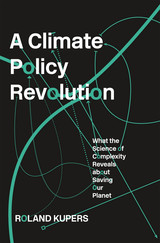 Humanity’s best hope for confronting the looming climate crisis rests with the new science of complexity.

The sheer complexity of climate change stops most solutions in their tracks. How do we give up fossil fuels when energy is connected to everything, from great-power contests to the value of your pension? Global economic growth depends on consumption, but that also produces the garbage now choking the oceans. To give up cars, coal, or meat would upend industries and entire ways of life. Faced with seemingly impossible tradeoffs, politicians dither and economists offer solutions at the margins, all while we flirt with the sixth extinction.

That’s why humanity’s last best hope is the young science of complex systems. Quitting coal, making autonomous cars ubiquitous, ending the middle-class addiction to consumption: all necessary to head off climate catastrophe, all deemed fantasies by pundits and policymakers, and all plausible in a complex systems view.

Roland Kupers shows how we have already broken the interwoven path dependencies that make fundamental change so daunting. Consider the mid-2000s, when, against all predictions, the United States rapidly switched from a reliance on coal primarily to natural gas. The change required targeted regulations, a few lone investors, independent researchers, and generous technology subsidies. But in a stunningly short period of time, shale oil nudged out coal, and carbon dioxide emissions dropped by 10 percent. Kupers shows how to replicate such patterns in order to improve transit, reduce plastics consumption, and temper the environmental impact of middle-class diets. Whether dissecting China’s Ecological Civilization or the United States’ Green New Deal, Kupers describes what’s folly, what’s possible, and which solutions just might work.


Rather than focusing on introducing more green technologies, which essentially just amounts to tweaking the status quo, Kupers argues that the transformative solutions needed are only discoverable at the interconnection of systems (societal, technical, and economic) and found through concerted experimentation and innovation…Gives academics, policymakers, economists, and climate governance specialists alike an additional tool with which to spark the climate revolution we desperately need.
-- Joel Terwilliger Environmental Politics


A Climate Policy Revolution not only shows convincingly that we cannot solve our problems with the same thinking we used when we created them, but also discusses realistic ways forward. Kupers successfully uses deep concepts of complexity science to point out the weaknesses in our thinking and policy measures when getting a grip on the causal networks that lead to our current environmental and climate challenges. This is a timely and important book; read it and act accordingly!
-- Peter M. A. Sloot, Scientific Director of the Institute for Advanced Study, Amsterdam, and Director of the Complexity Institute, Singapore


A Climate Policy Revolution delivers on the promise of its title: it offers a framework for how to think about the kinds of changes that we need to make to meet the climate crisis that is genuinely different and disruptive. Kupers’s focus—on disequilibrium rather than equilibrium, on closing off current paths as much as opening new ones, and on letting go as much as steering—is refreshing and compelling. It’s a book that should interest public problem-solvers of every stripe.
-- Anne-Marie Slaughter, author of The Chessboard and the Web: Strategies of Connection in a Networked World


With insight and clarity, A Climate Policy Revolution reveals the shortcomings of our current reductionist attempts to addressing climate change. Kupers instead offers an evolutionary approach that identifies what will be required to stabilize the climate.
-- Steven Hamburg, Chief Scientist, Environmental Defense Fund