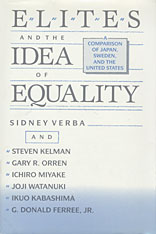 Reviews of this book:
"With this book [Sidney Verba] adds to his series of stimulating and influential studies of values and political life...One wishes that more books in political science these days had a subject as crucial to political life, as rich in comparative empirical data, as creative and sophisticated in methodological approaches, and as original and significant in its insights."
--Ellis S. Krauss, Journal of Public Policy

"Verba and his colleagues have done a fine job of gathering and analyzing data that call seriously into question both the Marxist view that bourgeois societies will inevitably tolerate great income differences and the Tory fear that democracy will inevitably lead to leveling and expropriation...[They] make a convincing case that the U.S. income distribution is as it is in large part because that is the way political elites--even relatively leftist ones--prefer it to be."

"This research program has produced and extraordinarily stimulating set of results. But its chief virtue is that it posed conceptually and then pursued empirically the kinds of very broad questions about a central issue in society that are, by definition, bypassed in more narrowly focused research."