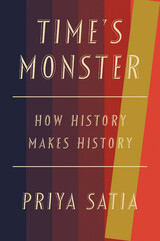 A New Statesman Book of the Year

“Time’s Monster is not a conventional history…The conclusion [Satia] arrives at ultimately is that it was the discipline of History itself, ever since its emergence as a field of academic inquiry in nineteenth century Europe, that provided well-intentioned, highly-educated Western liberals with a set of ethical tools for the management of their consciences as they unleashed murderous violence on ‘backward’ peoples across the planet…Built into the foundations of History, and indeed, many other disciplines in the Humanities, is the repression of some of the most important questions about human existence on this planet…Satia’s fearlessness in tackling big questions, even to the point of indicting the very discipline that has raised her to a position of not-inconsiderable eminence, suggests that she might well be the historian who could summon the courage to plunge into this chasm.”—Amitav Ghosh, Scroll

An award-winning author reconsiders the role of historians in political debate.

For generations, British thinkers told the history of an empire whose story was still very much in the making. While they wrote of conquest, imperial rule in India, the Middle East, Africa, and the Caribbean was consolidated. While they described the development of imperial governance, rebellions were brutally crushed. As they reimagined empire during the two world wars, decolonization was compromised. Priya Satia shows how these historians not only interpreted the major political events of their time but also shaped the future that followed.

Satia makes clear that historical imagination played a significant role in the unfolding of empire. History emerged as a mode of ethics in the modern period, endowing historians from John Stuart Mill to Winston Churchill with outsized policymaking power. At key moments in Satia’s telling, we find Britons warding off guilty conscience by recourse to particular notions of history, especially those that spotlighted great men helpless before the will of Providence. Braided with this story is an account of alternative visions articulated by anticolonial thinkers such as William Blake, Mahatma Gandhi, and E. P. Thompson. By the mid-twentieth century, their approaches had reshaped the discipline of history and the ethics that came with it.

Time’s Monster demonstrates the dramatic consequences of writing history today as much as in the past. Against the backdrop of enduring global inequalities, debates about reparations, and the crisis in the humanities, Satia’s is an urgent moral voice.

REVIEWS
Time’s Monster is not a conventional history…The conclusion [Satia] arrives at ultimately is that it was the discipline of History itself, ever since its emergence as a field of academic inquiry in nineteenth century Europe, that provided well-intentioned, highly-educated Western liberals with a set of ethical tools for the management of their consciences as they unleashed murderous violence on ‘backward’ peoples across the planet…Built into the foundations of History, and indeed, many other disciplines in the Humanities, is the repression of some of the most important questions about human existence on this planet…Satia’s fearlessness in tackling big questions, even to the point of indicting the very discipline that has raised her to a position of not-inconsiderable eminence, suggests that she might well be the historian who could summon the courage to plunge into this chasm.
-- Amitav Ghosh Scroll


Bracingly describes the ways imperialist historiography has shaped visions of the future as much as the past since the nineteenth century.
-- Pankaj Mishra New York Review of Books


A book about history and empire. Not a straightforward history, but an account of how the discipline of history has itself enabled the process of colonization…A coruscating and important reworking of the relationship between history, historians, and empire.
-- Kenan Malik The Guardian


Satia delivers volley after volley of ferocious attacks on ‘the self-pitying liberal view of empire.’…Raises an important question about whether historians are prosecutors and history is a court in which judgments should be passed on accused individuals.
-- Tony Barber Financial Times


Deeply thought-provoking and incisively argued, Time’s Monster is sure to become a classic for anyone interested in European empires and the role of history in shaping human behavior. In this extraordinary book, Priya Satia weaves wide-ranging evidence into a lively narrative, proving incontrovertibly why she is one of the most important historians of our time.
-- Caroline Elkins, Pulitzer Prize–winning author of Imperial Reckoning


A deeply insightful account of the way historical thinking informs the exercise of power. If historians are to play a positive role in the struggle to bend the arc of human history away from tyranny and toward justice, the lessons of this book should weigh heavily on our collective conscience. But more than that, this work is indispensable for anyone who wants to understand how the way we know the past shapes our future possibilities.
-- Vincent Brown, author of Tacky’s Revolt


History writing once burnished the monument of imperial progress, and continues to do so for many audiences today. In her brilliant and coruscating account of the uses of history in the making and unmaking of the British empire, Priya Satia offers a striking new way of confronting the problems that continue to plague contemporary societies. This is a bravura performance.
-- Samuel Moyn, author of Not Enough


Impassioned, searching…Usefully highlight[s] what is at stake, even today, in writing about the empires of the past.
-- Fara Dabhoiwala New York Review of Books


Ambitious…persuade[s] us to see the fundamentally imperialist design behind the modern (particularly British) conception of the discipline of history.
-- Saikat Majumdar Los Angeles Review of Books


[A] sweeping new book…It is both urgently of its time, responding to the exigencies of the present political moment, and timeless in its broader lessons about how to think about and do history…Will serve as an invaluable resource in efforts to decolonize and reimagine the pursuit of knowledge in a world in crisis.
-- Mircea Raianu H-Net Reviews


A sweeping account of the relationship between British historical thought and imperialism from Viscount Bolingbroke’s Letters on the Study and Use of History (1735) to recent postcolonial scholars such as Dipesh Chakrabarty and Shashi Tharoor…An impressive feat of historical research.
-- Morgan Golf-French History of European Ideas


Groundbreaking…Demonstrates how a wide variety of thinkers, stretching from the eighteenth century to the present, thought about and through history to uphold, contest, and remake British imperialism. Its nuance, its breadth of material, its insight, and its relevance to the present all make this book unmissable.
-- Jonathan Megerian New Books Network


In this searing book, Priya Satia demonstrates, yet again, that she is one of our most brilliant and original historians. Time’s Monster casts new light on the British Empire by homing in on a fundamental question—how did ‘good’ men, acutely concerned with their consciences, preside over systematic exploitation and repeated atrocities? Satia shows that only if we grapple with the complicity of historians in assuaging their moral qualms can we confront empire’s darkest legacies in our troubled world.
-- Sunil Amrith, author of Unruly Waters


A pathbreaking study of the historical imagination’s founding in colonialism. Moving from historical counternarratives to antihistorical thinking and poetry, Priya Satia guides us through important new ways of understanding the imperial past and its effects on our shared future.
-- Faisal Devji, author of The Impossible Indian


As people around the globe struggle against a world order that owes its existence to rampant resource exploitation and dehumanizing beliefs about racial hierarchies, Priya Satia has given us a timely and powerful reminder about the complicity of history, as a discipline, in the making of that order.
-- Jacob Dlamini, author of The Terrorist Album


A magisterial account of the role of history in the making of the British Empire. At a moment of chronic hand-wringing over the decline of the historical profession and the crisis of the humanities, Time’s Monster is an especially welcome addition for understanding how history can be used and misused.
-- Dinyar Patel, author of Naoroji


Presents a surprising, contrarian argument about the history of colonialism. It argues the abuses committed by modern empires occurred not in spite of their belief in historical progress but because of it.
-- Nick Burns American Purpose


Stimulating…Suggests that what is missing is in fact a critical look at the discipline of History itself, and that such an examination, far from securing History as the ready-made answer to fascism and racism, reveals an internal structure that was, until quite recently, predicated entirely on maintaining oppression across the globe…Brilliant analysis and searing critique…A necessary book for scholars of empire and for historians more generally.
-- Andrew Schumacher Bethke EuropeNow


Illuminating and timely…unpacks the complicity between historians and empire…[Satia] exposes, often in deeply unsettling ways, the ethical confusion at the core of British imperial thought and the Enlightenment concepts of universal human experience…An electrifying read.
-- Angus Mitchell Journal of Colonialism and Colonial History


The first book-length study that explains exactly how historians helped make empire. In painstaking detail, [Satia] shows that History has blood on its hands.
-- Yves Rees The Conversation

TABLE OF CONTENTS
Cover
Title Page
Copyright
Dedication
Contents
Note on Transliteration and Translation
Introduction
1. The Progress of War
2. Progress as Penance
3. Progress of Elimination
4. The Redemption of Progress
5. The Division of Progress
6. The Past and Future of History
Notes
Acknowledgments
Index