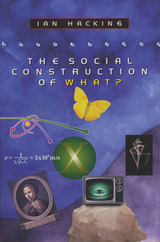 BUY FROM
The Social Construction of What?
by Ian Hacking
Harvard University Press, 1999
eISBN: 978-0-674-25425-1
Paper: 978-0-674-00412-2
Lost in the raging debate over the validity of social construction is the question of what, precisely, is being constructed. Facts, gender, quarks, reality? Is it a person? An object? An idea? A theory? Each entails a different notion of social construction, Ian Hacking reminds us. His book explores an array of examples to reveal the deep issues underlying contentious accounts of reality.

Especially troublesome in this dispute is the status of the natural sciences, and this is where Hacking finds some of his most telling cases, from the conflict between biological and social approaches to mental illness to vying accounts of current research in sedimentary geology. He looks at the issue of child abuse—very much a reality, though the idea of child abuse is a social product. He also cautiously examines the ways in which advanced research on new weapons influences not the content but the form of science. In conclusion, Hacking comments on the “culture wars” in anthropology, in particular a spat between leading ethnographers over Hawaii and Captain Cook. Written with generosity and gentle wit by one of our most distinguished philosophers of science, this wise book brings a much needed measure of clarity to current arguments about the nature of knowledge.
TABLE OF CONTENTS
Cover
Title Page
Copyright
Contents
Preface
Chapter 1. Why Ask What?
Chapter 2. Too Many Metaphors
Chapter 3. What about the Natural Sciences?
Chapter 4. Madness: Biological or Constructed?
Chapter 5. Kind-making: The Case of Child Abuse
Chapter 6. Weapons Research
Chapter 7. Rocks
Chapter 8. The End of Captain Cook
Notes
Works Cited
Index