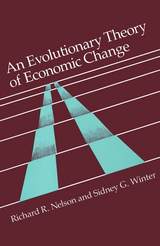 This book contains the most sustained and serious attack on mainstream, neoclassical economics in more than forty years. Richard R. Nelson and Sidney G. Winter focus their critique on the basic question of how firms and industries change overtime. They marshal significant objections to the fundamental neoclassical assumptions of profit maximization and market equilibrium, which they find ineffective in the analysis of technological innovation and the dynamics of competition among firms.

To replace these assumptions, they borrow from biology the concept of natural selection to construct a precise and detailed evolutionary theory of business behavior. They grant that films are motivated by profit and engage in search for ways of improving profits, but they do not consider them to be profit maximizing. Likewise, they emphasize the tendency for the more profitable firms to drive the less profitable ones out of business, but they do not focus their analysis on hypothetical states of industry equilibrium.

The results of their new paradigm and analytical framework are impressive. Not only have they been able to develop more coherent and powerful models of competitive firm dynamics under conditions of growth and technological change, but their approach is compatible with findings in psychology and other social sciences. Finally, their work has important implications for welfare economics and for government policy toward industry.