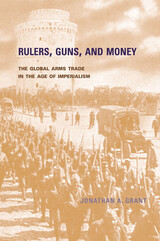 The explosion of the industrial revolution and the rise of imperialism in the second half of the nineteenth century served to dramatically increase the supply and demand for weapons on a global scale. No longer could arms manufacturers in industrialized nations subsist by supplying their own states' arsenals, causing them to seek markets beyond their own borders.

Challenging the traditional view of arms dealers as agents of their own countries, Jonathan Grant asserts that these firms pursued their own economic interests while convincing their homeland governments that weapons sales delivered national prestige and could influence foreign countries. Industrial and banking interests often worked counter to diplomatic interests as arms sales could potentially provide nonindustrial states with the means to resist imperialism or pursue their own imperial ambitions. It was not mere coincidence that the only African country not conquered by Europeans, Ethiopia, purchased weapons from Italy prior to an attempted Italian invasion.

From the rise of Remington and Winchester during the American Civil War, to the German firm Krupp's negotiations with the Russian government, to an intense military modernization contest between Chile and Argentina, Grant vividly chronicles how an arms trade led to an all-out arms race, and ultimately to war.
TABLE OF CONTENTS