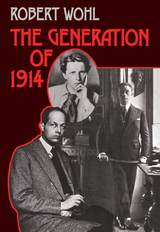 The generation of 1914 holds a special place in memory, affection, and myth. In this irresistible and moving book, Robert Wohl rescues it from the shadows of legend and brings it fully into the realm of understanding. He tells the story of the young men--the middle class elite of five European countries, France, Germany, England, Spain, and Italy, to recreate the generational consciousness that united them as well as the unique national experience that made them different.

These were men born at the end of the nineteenth century when the world of reason was disintegrating into a world of irrationality. They were destined to rule but their lives were interrupted by the greatest of wars, leaving them searching for identity and historical continuity. Wohl recaptures this search through novels, poems, autobiographies, memoirs, sociological treatises, philosophical essays, university lectures, political speeches, conversations when recorded, letters, personal notebooks, and newspaper articles. His book is a brilliant study of European mentalities, both collective and individual.

Probing behind ideas to find the experience that inspired them, Wohl illuminates in unexpected ways the origins of World War I and its impact on its participants. His exploration of the consciousness of generational unity and the power of the generational bond enables him to place in a novel context the spread of pessimism and despair, the waning of liberal and humanitarian values, the rise of Communist and Fascist movements, and the sudden eruption of violence in Europe's progressive countries between the two world wars.
TABLE OF CONTENTS