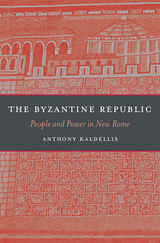 Scholars have long claimed that the Eastern Roman Empire, a Christian theocracy, bore little resemblance to ancient Rome. Here, Anthony Kaldellis reconnects Byzantium to its Roman roots, arguing that it was essentially a republic, with power exercised on behalf of, and sometimes by, Greek-speaking citizens who considered themselves fully Roman.
TABLE OF CONTENTS
Contents
Preface
1. Introducing the Byzantine Republic
2. The Emperor in the Republic
3. Extralegal Authority in a Lawful Polity
4. The Sovereignty of the People in Theory
5. The Sovereignty of the People in Practice
6. The Secular Republic and the Theocratic “Imperial Idea”
Conclusion
Notes
Bibliography
Acknowledgments
Index