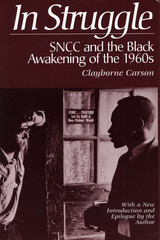 In Struggle: SNCC and the Black Awakening of the 1960s, With a New Introduction and Epilogue by the Author
by Clayborne Carson
Harvard University Press, 1995
Paper: 978-0-674-44727-1
eISBN: 978-0-674-25334-6
With its radical ideology and effective tactics, the Student Nonviolent Coordinating Committee (SNCC) was the cutting edge of the civil rights movement during the 1960s. This sympathetic yet evenhanded book records for the first time the complete story of SNCC’s evolution, of its successes and its difficulties in the ongoing struggle to end white oppression.

At its birth, SNCC was composed of black college students who shared an ideology of moral radicalism. This ideology, with its emphasis on nonviolence, challenged Southern segregation. SNCC students were the earliest civil rights fighters of the Second Reconstruction. They conducted sit-ins at lunch counters, spearheaded the freedom rides, and organized voter registration, which shook white complacency and awakened black political consciousness. In the process, Clayborne Carson shows, SNCC changed from a group that endorsed white middle-class values to one that questioned the basic assumptions of liberal ideology and raised the fist for black power. Indeed, SNCC’s radical and penetrating analysis of the American power structure reached beyond the black community to help spark wider social protests of the 1960s, such as the anti–Vietnam War movement.

Carson’s history of SNCC goes behind the scene to determine why the group’s ideological evolution was accompanied by bitter power struggles within the organization. Using interviews, transcripts of meetings, unpublished position papers, and recently released FBI documents, he reveals how a radical group is subject to enormous, often divisive pressures as it fights the difficult battle for social change.