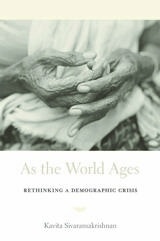 People are living longer, creating an unexpected boom in the elderly population. Longevity is increasing not only in wealthy countries but in developing nations as well. In response, many policy makers and scholars are preparing for a global crisis of aging. But for too long, Western experts have conceived of aging as a universal predicament—one that supposedly provokes the same welfare concerns in every context. In the twenty-first century, Kavita Sivaramakrishnan writes, we must embrace a new approach to the problem, one that prioritizes local agendas and values.

As the World Ages is a history of how gerontologists, doctors, social scientists, and activists came to define the issue of global aging. Sivaramakrishnan shows that transnational organizations like the United Nations, private NGOs, and philanthropic foundations embraced programs that reflected prevailing Western ideas about development and modernization. The dominant paradigm often assumed that, because large-scale growth of an aging population happened first in the West, developing societies will experience the issues of aging in the same ways and on the same terms as their Western counterparts. But regional experts are beginning to question this one-size-fits-all model and have chosen instead to recast Western expertise in response to provincial conditions. Focusing on South Asia and Africa, Sivaramakrishnan shows how regional voices have argued for an approach that responds to local needs and concerns. The research presented in As the World Ages will help scholars, policy makers, and advocates appreciate the challenges of this recent shift in global demographics and find solutions sensitive to real life in diverse communities.

REVIEWS
This smart, ambitious book tracks ‘global aging’ as an emergent problem and site of expertise over the twentieth century. Sivaramakrishnan attends carefully to entangled debates on aging, race, chronicity, pathophysiology, and care in Africa, South Asia, North America, and Europe. As the World Ages is not only a signal intervention in the history of public health but in the analysis of decolonization and development. Just as importantly, it offers a long overdue reorientation for social scientific approaches to old age.
-- Lawrence Cohen, author of No Aging in India: Alzheimer’s, The Bad Family, and Other Modern Things


The academic discourse on aging has long been dominated by assumptions that privileged the West. Sivaramakrishnan’s groundbreaking and well-researched history brilliantly unpacks these assumptions. It also drives home a fundamental distinction between the narratives of industrialization and globalization: the former promoted a stadial and homogenizing view of world history, the latter connects and yet highlights local differences. A thoughtful and impressive book.
-- Dipesh Chakrabarty, author of Provincializing Europe: Postcolonial Thought and Historical Difference


As the World Ages is a superb book that brings together intellectual, institutional, and medical history to show how aging emerged as a global problem in the second half of the twentieth century. Ranging widely across sites and archives and scholarly fields, while rooted in a deep understanding of the Indian context, this will be essential reading for scholars across many disciplines, from public health to postcolonial history.
-- Sunil Amrith, author of Crossing the Bay of Bengal: The Furies of Nature and the Fortunes of Migrants


Ambitious and impressive…presents a compelling and nuanced analysis of how aging has become a global problem and a domain of expertise…Sivaramakrishnan offers new, dynamic understandings of how aging has been linked to issues of health, family, labor, and social policy…Essential reading for any anthropologist or social scientist who studies aging…[A] rich and nuanced book.
-- Jessica C. Robbins Medical Anthropology Quarterly

TABLE OF CONTENTS
Cover
Title Page
Copyright
Dedication
Contents
Introduction: Coming of Age
1. Old Age in Young Nations
2. Growing Old in the Time of Chronic Disease
3. The Emergence of the International Gerontologist
4. New Frontiers: Aging Experts in Asia and Africa
5. The Birth of Global Aging and Its Local Afterlives
6. International NGOs and the Aged in the Developing World
Epilogue: From Decolonization to Globalization
Abbreviations
Notes
Acknowledgments
Index