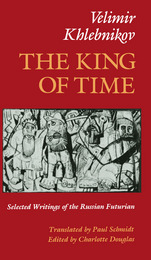 The King of Time: Selected Writings of the Russian Futurian
by Velimir Khlebnikov
translated by Paul Schmidt
edited by Charlotte Douglas

Reviews of this book:
At times [Khlebnikov's] verse sounds like what birds presumably heard from St. Francis. Under his pen, nouns, verbs, adjectives, adverbs, and prepositions undergo mutations as mind-boggling as those of a cell hit by immense radiation. Beautiful or grotesque, the results are often memorable...diamonds of an unparalleled splendor.
--Joseph Brodsky, New Republic

Reviews of this book:
He was surely one of the most remarkable practitioners in language who has ever written. He seems to inhabit the very heart of his language, exploring its roots, making it send up new and wonderful growths...The foreigner who knows Russian can glimpse this and admire the marvels of Khlebnikov's language, though never with the inwardness of the native speaker. But what of those who approach him through translation? Can they come to see the importance and beauty of his work? This is the challenge taken up by Paul Schmidt, the translator of the proposed complete works, and he rises to it nobly.
--Peter France, Times Literary Supplement

Reviews of this book:
The King of Time...represents a deft feat of translation...It offers readers the chance to imagine, experience and restore the full analogy between pictorial and verbal creation.
--Elliott Mossman, New York Times Book Review

Reviews of this book:
Aiming to produce a 'new text' rather than an imitation of the original, [Schmidt] has explored his own language in the same spirit in which Khlebnikov burrowed like a mole into the Russian word. Schmidt's inventiveness often rivals the Russian of the original.
--Journal of Russian Studies
TABLE OF CONTENTS